Iron Palm or Iron Hand (Chinese: 铁掌功) is a body of training techniques in various Chinese martial arts. It is originally one of the 72 arts of the Shaolin temple. These conditioning techniques are typically meant to condition the hands to allow a practitioner to deliver very powerful blows without injury to his or her hands. 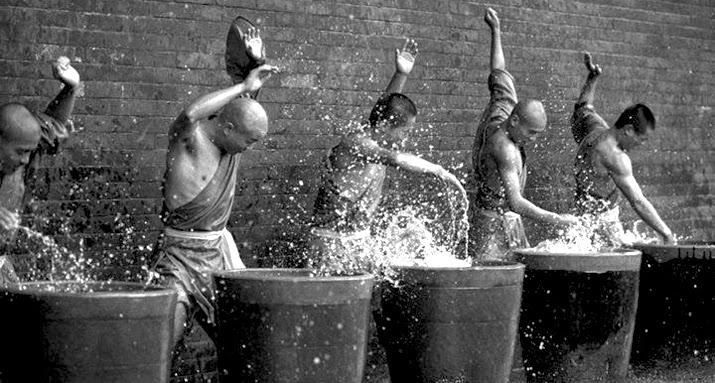 Iron Palm is a broad term covering many different conditioning methods. Some Iron Palm systems are considered internal and others are purely external in training methods. Martial artists who practice Iron Palm training are not unified in their training and techniques. Some teachers treat their Iron Palm methodology as a valuable secret, and only share their specific techniques, training methods, and herbal remedies with a select few.
Iron Palm is not a martial arts style unto itself, but a type of conditioning featured in many schools of Chinese martial arts. Some non-Chinese martial arts styles, such as Muay Thai and many schools of Karate, also feature hand conditioning; however, the term “Iron Palm” is not normally used to describe these types of training.

Schools of Iron Palm training are often divided into “direct” or “indirect.” Both methods usually consist of striking progressively harder surfaces. Some practitioners also refer to their training as Nei Jing (“internal”) or Li (“external”), this deals with the Qi energy or type of force (jin) used. In the “direct” method the hands are thrust into buckets or containers of the medium; the hands come into direct-contact with the substance. In the “indirect” method, the practitioner strikes bags or other containers filled with various materials. As training progresses, the bags or buckets filled with increasingly resistant substances starting with beans then sand, progressing onto gravel or rocks, then finally lead and iron shot. Practitioners can measure their progress based upon the number of strikes performed in a particular training session or by the amount of clock time spent training. Relaxation while training strikes and use of good Diedajiu medicine is imperative to proper success. Proper breathing is also essential for maximum effect/success.
The Chinese Martial Arts can utilize a wide variety of open and closed hand strikes. Hardening the hands is also considered by some to supplement speed and strength lost through aging. Iron palm practitioners often demonstrate their abilities by breaking hard objects such as bricks, coconuts, stones and boards with their bare hands or in some cases hitting a steel object rapidly without sustaining injury. These demonstrations were often street performances used to make money for a martial artist or martial arts school.
Posted by Unknown at 07:55